For more details, please visit http://www.bioinformatics.org/wiki/Inbix10.
There are various speakers of repute in the area of Systems Biology and Bioinformatics.

Registration starts October 15, 2009. Stay tuned for more announcements.
If you are a group of 15 or more, you can form a virtual hub.
This is organized by Bioclues.org and Bioinformatics.org.
nsgrp NS Group, MBU, IISc at 1:08 PM No comments: 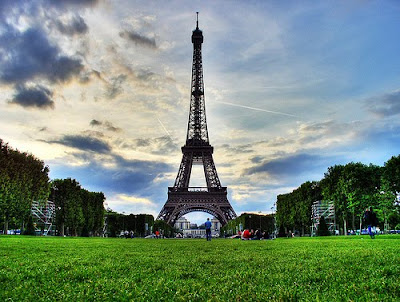 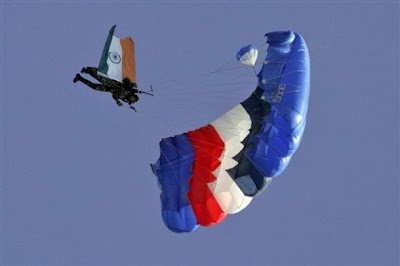 Diwali Wishes to you all frm NS Group..

Since 2004, the Ranking Web is published twice a year (January and July), covering more than 17,000 Higher Education Institutions worldwide. Web presence measures the activity and visibility of the institutions and it is a good indicator of impact and prestige of universities. Rank summarizes the global performance of the University, provides information for candidate students and scholars, and reflects the commitment to the dissemination of scientific knowledge.

We intend to motivate both institutions and scholars to have a web presence that reflect accurately their activities. If the web performance of an institution is below the expected position according to their academic excellence, university authorities should reconsider their web policy, promoting substantial increases of the volume and quality of their electronic publications.

The Indian Institute of Science in Bangalore has been rated the best in South Asia in terms of visibility and scholarly papers on the net in the latest ranking of such institutions by Cybermetric Lab, the largest public research institution in Spain.

In fact all the top 10 slots are for institutions in India, with two universities in Sri Lanka - University of Moratuwa and University of Colombo placed 10th and 11th on the list.

The highest ranked institution from Pakistan is the Lahore University of Management Sciences at the 17th position.

'Candidate students should use additional criteria if they are trying to choose university. Webometrics ranking correlates well with quality of education provided and academic prestige,' said a statement from Cybermetric Lab.

A total of 15,000 universities globally were analysed, of which about 5,000 were ranked in the list.

The Massachusetts Institute of Technology in Boston, US was the top-ranked university in the world with the rest 20 positions also held by American universities.

Venkatraman "Venki" Ramakrishnan (Tamil: வெங்கட்ராமன் ராமகிருஷ்ணன்; [Homepage] born 1952 in Chidambaram, Tamil Nadu, India) is a structural biologist at the Laboratory of Molecular Biology of the Medical Research Council located in Cambridge, England. He is a Fellow of Trinity College, Cambridge and a Fellow of the Royal Society. He was awarded the 2009 Nobel Prize in Chemistry, along with Thomas A. Steitz and Ada Yonath.

Professor Venkatraman Ramakrishnan's friends in IISc, Bengaluru. Professor Umesh Varshney from the Indian Institute of Science provides a fascinating glimpse into the scientist who won the Nobel Prize for Chemistry 2009.

Indian-American Venkatraman Ramakrishnan, 57, has won this year's Nobel Prize in Chemistry, the Nobel Foundation announced on Wednesday. He shares it with Thomas Steitz, an American, and Ada Yonath, an Israeli.

Well known as `Venky' in India's scientific circles, Ramakrishnan, has been a visiting lecturer at the Indian Institute of Science (IISc) Bangalore, for many years. He was born and schooled at Chidambaram, Tamil Nadu and graduated from M.S. University in Vadodara, Gujarat, before moving to the United States for his Ph.D. from Ohio University.

He is the seventh person of Indian origin to win the Nobel.

"People here are very excited," said P. Balaram, director of IISc. "His is one of the most magnificent pieces of work in structural biology."

The three scientists won the prize for their research into ribosomes, which are proteinproducing structures found in all cells. Ramakrishnan used X-ray crystallography -- the same method used by the discoverers of the DNA -- to map the thousands of microscopic atoms that make up a ribosome.

The Nobel committee described ribosomal protein synthesis as "one of life's core processes." Antibiotics based on Ramakrishnan's model will save lives and decrease suffering, the Committee added. 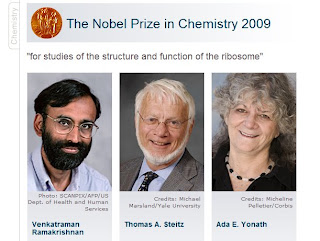 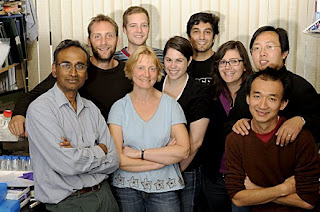 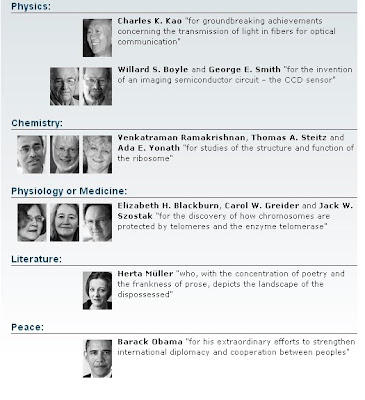